McDonald’s Mourns: The Man Who Created the Big Mac Is Dead at 98 (He Ate 1 Every Week)

In the beginning, McDonald’s didn’t even want to hear it.

But Michael «Jim» Delligatti didn’t care. He was a franchise owner with 48 McDonald’s restaurants across the country. He forced the burger giant’s hand by offering his crazy new menu item in all of his outlets, and became one the greatest unsung innovators of all time in the process.

His creation? The Big Mac–a hamburger with (get this): two buns! The year was 1967. The Wall Street Journal picks it up:

The hamburger features two beef patties, a mildly tangy sauce, lettuce, cheese, pickles and onions slathered over a soft sesame-seed bun sliced into three layers. The original price was 45 cents, compared with an average of about $5 today. McDonald’s put the Big Mac on its national menu in 1968.

Delligatti, whom you might never heard of until today, died this week at the age of 98. Lived to that ripe old age, we should add, while reportedly consuming a diet that included at least one Big Mac each week for nearly 50 years.

Oh, and he also invented the Egg McMuffin in 1970–at least that’s what some reports say. (Others say the McMuffin might have been another franchisee’s creation.) Regardless: an American icon and another icon.

Granted, you might nitpick and point out that the Big Mac isn’t what it used to be. The Golden Arches have had a tougher time of late–battling healthier choices on one side, and gourmet $9 burger joints on the other side. Delligatti even lived to see them tinker with the recipe.

And yet: If any of us invents something that lasts as long in the public consciousness as the Big Mac or the Egg McMuffin, we will have done something worth remembering. Here are a few things that the were introduced to the United States long after the Big Mac was already a major American icon: 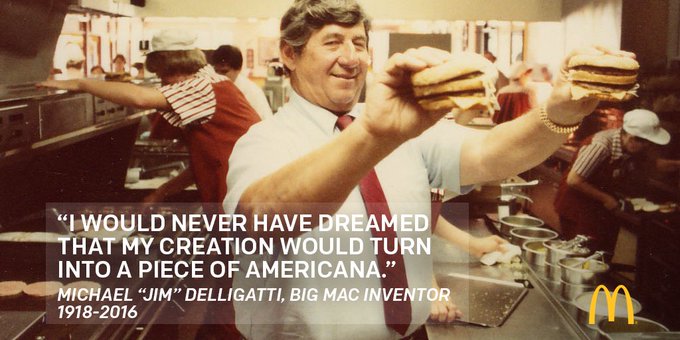 Today, we celebrate the 98 inspirational years of Big Mac inventor, Michael «Jim» Delligatti. Jim, we thank and will forever remember you.

All of that, and still, the latest estimates I could find are that McDonald’s still sells 550 million Big Macs in the United States each year–nearly twice that if you count every single instance of two all-beef patties, special sauce, lettuce, cheese, pickles, onions on a sesame seed bun sold worldwide.

So, rest in peace Mr. Delligatti. Our condolences to his wife, Ellie, his sons and grandchildren (also McDonald’s franchisees, by the way). And for the rest of us, think of him the next time you have an amazing idea and the powers of be tell you that it won’t work.